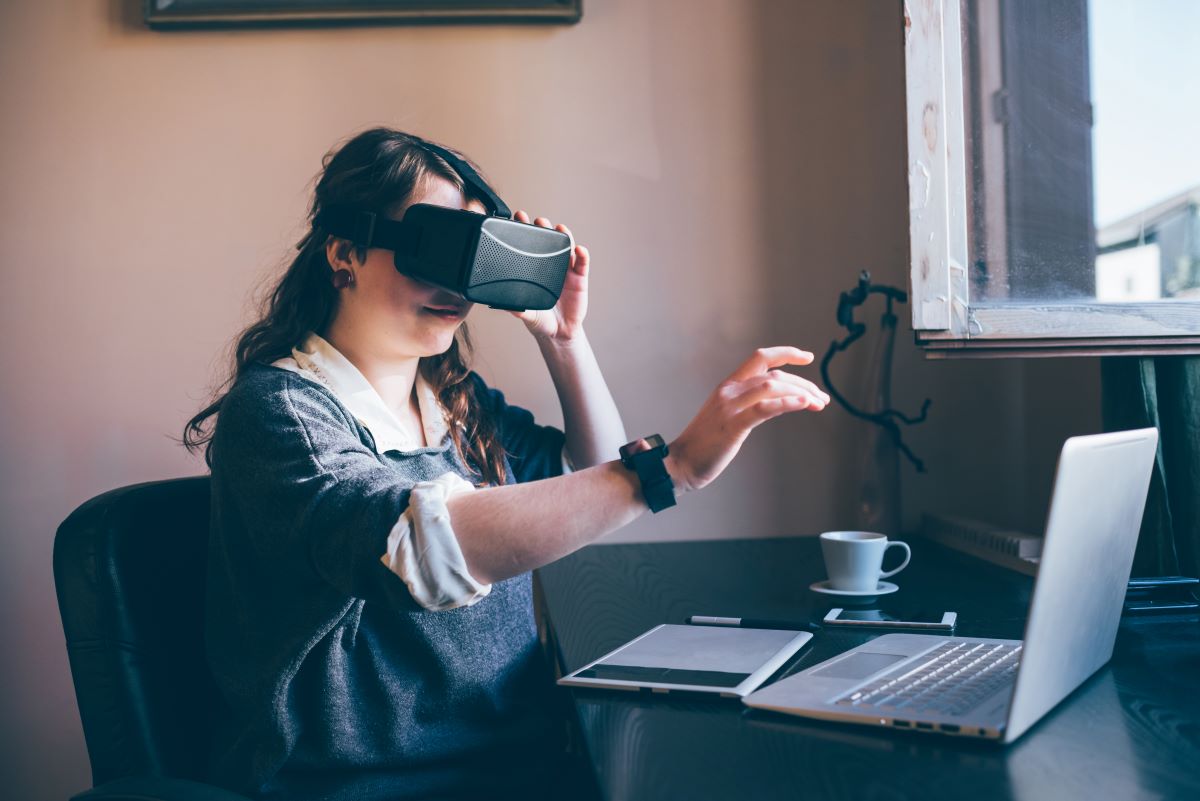 The Complete Guide to Getting Started With VR

If you are looking to get started with VR you must first understand what it’s all about. The world of virtual reality has grown much more significant in the last decade. At the start of the decade, the idea of a fully immersive virtual reality game still seemed to most like the stuff of science fiction.

Today there are multiple major players in the industry, and it is only growing more popular each day. So, what is virtual reality, what can you do with it, how much does it cost to get started, and most importantly HOW do you get started using VR?  All discussed here…

Getting Starting With VR

To get started with virtual reality, you need to get the right equipment. Today there are many manufacturers making quality VR headsets.

There are three main categories of headsets. Beyond this, there are some additional accessories that some but not. R apps require such as a controller.

What is Virtual Reality or VR?

Virtual reality lets people fully immerse themselves in a virtual world. Instead of staring at a screen from feet away while playing a video game, now you can step right into the action yourself. Just put on your VR headset, boot it up, and get ready for the action.

These apps and games put you in a handcrafted world. Most also have built-in audio features as well for completely engaging surround sound. If you are a gamer, you may like directional audio to hear which direction the action is.

What Equipment is Necessary to Get Started in VR?

The first thing you need to begin experiencing virtual reality is the right equipment, which starts with a headset. The three different types of VR headsets that currently dominate the markets are listed below.

Each will be similar to the other, but there are key differences between the various models. Depending on the type of phone or device you plan to use in VR, you may want to select one model over another.

For example, let’s say you own an iPhone. You would not want to get a headset that was not compatible with Apple products. This limits the options available down to a more manageable number.

That way you don’t waste time learning about the equipment you would not be capable of using anyway.

Multiple companies make standalone headsets for virtual reality. However, there are only two top contenders in the standalone headset market. These are the Oculus Rift and the HYC Vive. Each of these does not require any additional cables or outside equipment.

The headset contains everything you need for the experience. Any standalone headset will be wireless, but not all wireless headsets are standalone.

These are great if you want to experience virtual reality but don’t own a smartphone or computer because you do not need any additional equipment. The headset will do the job fine alone.

The next major category of virtual headsets has been designed to work with desktop computers. The most popular example of this kind of headset is The PlayStation VR headset made to work with the Sony PlayStation 4.

The biggest drawback of these kinds of headsets is they are limited in their mobility. If you want to take it with you somewhere, you’ll have to get all of the equipment together.

These can be pretty impressive pieces of equipment all though. They are becoming more and more lifelike each year.

They hold the device inside of the headset and suspend it in front of your eyes. Some of these are not as impressive as the consul or standalone options, but they are becoming more and more technically advanced.

If you play any games in virtual reality or use any applications, then the chances are that you will need a controller. These allow you to easily control the engine while you are enjoying the virtual reality experience.

They are all wireless and normally aren’t able to sense the motion of your arms and hands to display their locations in the virtual reality world.

Virtual reality headset manufacturers are implementing one of the newest technology in hand tracking technology.

This allows you to easily control a virtual reality experience without having to handle a cumbersome controller.

What Can You Do With VR?

Today, there are many things you can do you with virtual reality. Let’s put it this way, VR has come a LONG WAY. If you want to experience what it would feel like to go to a place in person, you can try to simulate it through virtual reality.

There are entire stores full of apps and games you can download to use in virtual reality. Everything from playing your favorite video game to painting a new painting on canvas can be done inside the virtual world.

Best VR Apps
The following three apps are just a couple of examples of the wide range of experiences possible through virtual reality. We also have a while discussion around the best VR games for your iPhone if you want to read that here.

There are many more where these came from, and a ton of them are relatively undiscovered because of the fairly small demographic using virtual reality currently. You could easily end up finding a home-run that few people know of if you look for it.

This app is perfect for people that need to give speeches but have stage fright. If you believe that practicing your speech in front of an audience would help you and deliver it better, you have to try it out. It allows you to practice giving a speech in front of a live audience.

Of course, there are more video games made for virtual reality than almost any other type of application.

Romans from Mars 360 is just one of the many amazing virtual reality games that you can experience this year. See if you can save the world in an immersive 3-D fully 360° world that is entirely virtual.

The New York Times has taken virtual reality in bed, something with it that creates a new type of journalism.

They first began five years ago, creating virtual reality journalism pieces that you can experience. Today there are over 300 such examples of journalistic art.

Advantages and Drawbacks of Virtual Reality

Depending on the perspective you adopt, there are different advantages or drawbacks associated with virtual reality. Overall, it seems to be a unique piece of technology that is highly versatile. While it will not transform everything, know many new ways of thinking have yet to be explored in this industry.  When you are just getting started using VR, you can look at the advantages and disadvantages:

Higher quality equipment and more experience in the development community developing a virtual reality application has made the virtual reality industry much more palatable to the average consumer now. If you want to play video games and be part of the action, it is the best way to do this.

There are multiple potential drawbacks commonly associated with virtual reality on those they typically are not too large of a deal. The biggest complaint is that people get motion sickness when they play for too long.

The easiest solution for this is to take regular breaks. Being in a world where there are tons of movement, but your body does not move in reality, can induce motion sickness. The other major problem is that no matter how high tech the screen technology is when the screen is only a couple of inches from your eyes, you will still see pixels.

This can create the virtual world’s effect, looking as if you were staring at it through a screen door.

Augmented reality is another type of software that has been making huge waves in recent years. Instead of transporting you to an entirely virtual world, virtual reality does augmented reality applications, focusing on immersing experience in a slightly different way.

Typically, they will use the camera of your device and then overly virtual items on top of it. This creates a reality augmented with virtual items, but you still see the real world around you. Perhaps the most popular example of this is the video game called Pokemon go.  We have a whole article dedicated to the differences in these two technologies if you want to check that out.

How Much Does It Cost To Get Started with VR?

In general, most pieces of virtual reality equipment will cost a few hundred dollars. For example, the PlayStation VR headset retails for $400.Once you have the equipment, then you may also need to pay for applications.

Prices for virtual reality applications can vary significantly, with some being available for free and others costing over $50. The key to remember when getting started with VR is that you can spend a lot, or just a little.  Either way the goal is to have fun and you don’t need to spend a ton of money to do that!

Many people who are just getting started with VR have the preconceived notion that they will need a bigger room than they have to play virtual reality comfortably. While having a larger room can give you more areas to move in while you are playing, there is no requirement for large rooms.

The vast majority of virtual reality experiences are designed to be played while completely motionless. Some manufacturers have minimum requirements for the size of the room where their devices are to be played.

The world of virtual reality has advanced by leaps and bounds over the last ten years. Now many quality products take advantage of the new technology effectively. You can experience entire news stories from virtual reality and play some of your favorite video games from all time.

The future of technology only looks brighter. Things are being developed that promise to launch the technology into the stratosphere, including virtual smell technology, to incorporate all of your senses into the virtual world.

Eventually, it may even be possible to interface with the devices through a neural interface directly. These devices allow computers to read the brain’s thought patterns essentially.

These have already been used to give disabled individuals control over computers to communicate more easily. One thing is for certain; there is no sign of the virtual reality industry slowing down anytime soon.