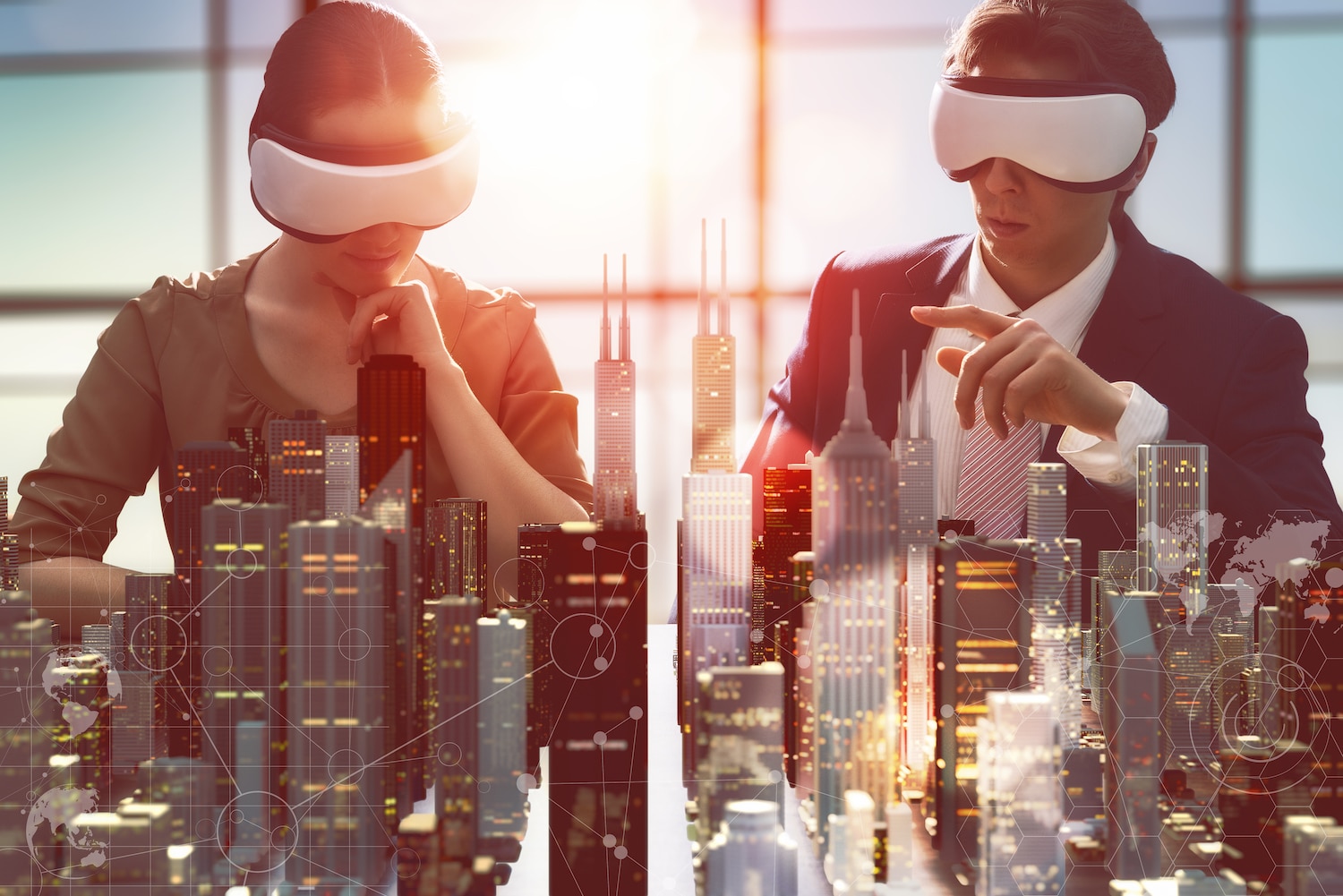 Virtual Reality, known simply as VR, is a recent innovation in the rapidly expanding world of technology. It can simply be explained as a simulation in three dimensions of images that are real or appear to be real. The simulation is created by a computer. But, what are some real world uses for virtual reality?

The user experiences VR either through a head-mounted display (HMD) or gloves with sensors. The screen may recreate an island, or it creates something fictional like a planet. Instead of watching the screen, the user appears to be inside the screen. The experience involves sight, hearing, and touch. Its only limits are the power of the computer and the created content. When the user turns their head, the screen moves in the same direction. To the user, it is real.

There is virtually no limit to its development. More companies are entering the field developing new hardware and experiences. VR seems like a fascinating experience for a game or fun, but what are real world uses for VR. This article will delve into those applications. This is not an exhaustive list. As the technology grows and changes, more people will realize the true value of VR.

But, what are some real world examples of virtual reality? Well, we’re glad you asked!

VR IN THE MILITARY

The military is one arena that is taking VR to new heights. The Army can use the technology to experience battlefield situations without the risk of injury. The content can run an almost endless number of scenarios that might occur either in battle or in preparation for combat. Not only is risk eliminated, but the cost is greatly diminished. Soldiers can experience the world without leaving a room. There are some segments of military world who are actually creating their own VR gear that can be used for training, simulation, and much more.

It is great training for new recruits. It also provides refresher courses for soldiers with real life experiences. Finally, VR provides the means to introduce new weapons and ideas without the necessity and expense of building real world structures. There will also be times when VR is the only way to recreate the battlefield.

The Air Force uses VR for flight simulations. It can be pilots flying transport planes into war zones or fighter pilots tasked with avoiding missiles or engaging other jets. This training saves money and avoids risk which is a common theme with VR. All pilots need to constantly update their skills. In addition, a pilot checked out in one aircraft needs additional training to be proficient in another plane. These uses of VR in the real world are amazing!

Commercial airline pilots do not normally have to worry about missiles and enemy fighters. The do, however, have challenges flying in bad weather or landing under unusual circumstances. VR allows this training. It also allows these pilots to experience new technology in their planes without having to take the planes up in the air.

An example would be a commercial pilot who is now going to be landing at an unfamiliar airport. He or she can practice different approaches to the airport, landing on the runways, and taking off in all possible scenarios. The pilot will then a feeling of having been there before when they land at the real location.

Hopefully, commercial pilots will never have to encounter these events in real life. If they do, they will be prepared. They can remember their VR experience and proceed accordingly.

Medical training is real life. It is in some ways like the military uses. Students can experience treating patients without having to use live people. The same theory that applies to new doctors also involves experienced surgeons. They can have the chance to operate in VR. The patients are not real. They do appear to be real, and the surgeon operates in a virtual reality setting. They can experience what works and what does not.

A new surgical technique can be tried and learned in VR. Different ideas can be used to accomplish the same goal. A surgeon can expand his or her world without entering the operating room. This is a use that has no limits.

Training and education are not limited to the military and medicine. Classroom teachers can use VR in many ways. A field trip to a museum can now be undertaken without ever leaving the classroom. A study of the solar system takes on new meaning when each student enters the virtual reality of the planets. A student can see up close what each planet looks like and how it orbits the sun. It certainly beats looking at a drawing on the board.

Students can interact with each other in the screen in a variety of educational endeavors. Teachers can create any situation that allows students to broaden their horizons.

VR IN THE BUSINESS WORLD

Businesses are using VR in many settings. It can be a tool for recruitment. A potential employee could be given a written test as a means of evaluation. They could now be placed in a VR setting to see how they react and perform. The content could be an actual event that has occurred in the company. It would be placing the recruit in a trial run at the firm without actually doing so.

Workers in a firm can use VR to collaborate with fellow employees on projects. They do not have to be in the same physical location. They can be in other states or countries. This will allow for exchange of ideas. It is also a means of spotting business trends. There is probably no limit to what a creative company can devise.

A business such as a grocery store can use VR to create a virtual layout of the store. They can move items around to determine the best location. All of this can happen without having to move the real products in their business. They can place signs in different locations within the business and see how they look. A department store can move merchandise to see what works best when attracting the customer’s attention.

VIRTUAL REALITY AND THE MANAGEMENT OF PAIN

Pain is a powerful force. It originates in a part of the body but is experienced in the mind. A patient can wear a HMD, and their mind can be distracted from the pain. This can be used by cancer patients, anyone suffering from severe burns, and any other chronic pain It would be meditation with a headset.

There is another place where pain is common. That location is the dentist chair. Some dentists are putting a HMD on a patient to distract them while teeth are pulled or a root canal is performed. Again the idea is for the patient to retreat into the screen and forget they are in the dental chair. It can be a possible alternative to pain killers.

Mental health can be a difficult area to treat. VR is now being utilized in these areas. They are many possibilities. One involves anxiety. Some people have situations that create great fear. They avoid them at all costs. VR allows the patient to address whatever causes their anxiety in an artificially created environment. They can realize that their anxiety need not be a condition that restricts their life. Once they handle the anxiety in VR, they are ready to go into the real world. Although there are some noted side effects of virtual reality, it’s ability to treat mental health disorders is definitely an exciting area for future growth.

Think of a person who for whatever reason is afraid to go to a library. Just the thought creates great anxiety. In virtual reality they enter a library. They can then realize that it is not as scary as they think. In time they may be able to enter a real library rather than a virtual one.

Another mental health issue is post-traumatic stress disorder (PTSD). Most people think of the mental health problem as one suffered by soldiers in combat. Other individuals can have the disorder. A person in a terrible automobile accident can suffer just as much. A victim of physical or sexual abuse also falls in this category. In each case, VR can recreate the circumstances that caused the problem. With medical help, the person can learn how to cope with this medical condition.

Autism is a medical condition that seems to be more common. The simple explanation of autism is the lack of social skills. It is much more complicated but a person who is autistic wants to withdraw from society. They cannot interact with other people. VR allows the person to interact and develop those skills. This is somewhat like anxiety. It is just a fear of the unknown. A person can move around in a screen without fear. It can allow the medical provider to address the issues involved.

Autistic individuals tend to avoid eye contact. It makes them uncomfortable. VR allows the person, usually a child, to learn how to look at a person in the safe setting of the screen. It is all part of the expanding world of treating mental conditions.

VR IN THE SPORTS WORLD

The sports world has embraced VR. A team can set a content for a player to experience over and over. It might be a batter in baseball or a basketball player shooting foul shots. Another possibility is an injured athlete being able to perform in VR when they could not do so in real life due to the injury.

There is also the possibility of a real game being made available in VR. A spectator could experience the reality of attending the game in person. It might seem like the individual would know they are not really at the game. Improvements in VR would most likely blur the distinction to the point it will be hard to tell what is real and what is virtual.

Real world uses would not be complete without the mention of fun. Leisure activities and vacations are part of life. A person can take a trip to Paris or anywhere else they have also wanted to visit. Businesses can offer this perk for their employees. The possibilities are endless.

This article has touched on many of the real world uses for virtual reality. Two common threads run through all the applications. Those points are risk and cost. Virtual reality removes the risk to the user. It also drastically reduces the cost to the organization or person utilizing the technology. The cost will only come down in the future. The elimination of risk will become an accepted part of the experience. Real world uses for VR will only continue to grow and expand in the foreseeable future.