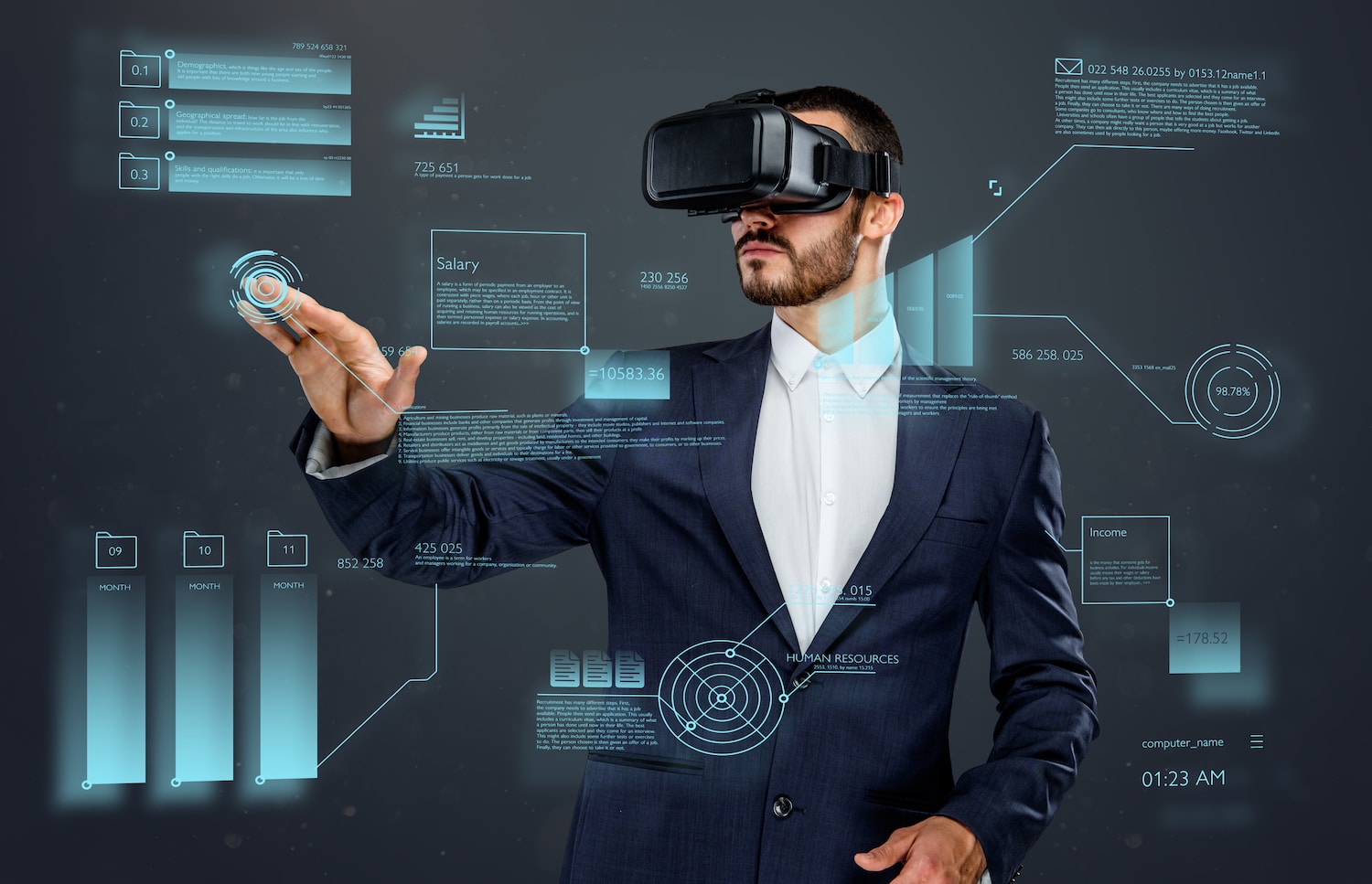 In this post we will focus on virtual reality in the immersive form. This is similar to the type of VR the Oculus Rift/Quest uses, these devices are meant to use most of your senses and immerse your experience into simulated sensory devices.

Virtual Reality headsets like the Oculus Rift are made up of a few main components. There are two controllers called “touch” and the main headset. These components are what translate your natural senses into a virtual environment.

While we go much deeper into the real world uses of virtual reality in this post, here is a quick overview:

Entertainment-Extension of established platforms
Virtual Reality exists to some degree already in the form of simulated worlds on your computer screen. The most popular kind is “Second Life”, a place where users create their own environments, social norms, and appearance and are able to construct a “reality” in that world. Second Life/Linden Labs has extended to testing its online world into devices like the Oculus rift in order to make the world of Second Life more realistic.

Education
Virtual Reality is also extending from entertainment into educational environments as well. The push stems from the balance of learning from rote and theoretical understanding into a digested sensory experience. The closest students can get to being able to gain experience without errors is in a simulated environment. For example, VR is heavily pushed in the medical sciences due to its ability to reduce risk to students of surgery when gaining experience with operation procedures. VR has gone as far to replicate tactile force and “touch” that helps students gain a realistic feeling while engaged in a virtual procedure.

Rehabilitation
Physical Therapy for those who have lost motor abilities can be aided by virtual reality treatments. Impairments following a traumatic brain injury, for example can make simple gross and fine motor actions limited. Virtual Reality in physical rehabilitation has helped in reactivating areas in the brain that re-train the cognitive impairments. Although this can be achieved in person, the recording process may be more exact when utilizing virtual reality.

The Dark side of Virtual Reality

So far we have reviewed what virtual reality is, some of the most common ways in which it is applied currently, and why many are very positive about its contribution to society. Although virtual reality is very exciting and creates avenues for entertainment, learning, and health that were not possible before, every added benefit comes with a deficiency in another area as well.

This article hopes to expound on some of these costs as negative effects are less talked about and often passed over in the effort to gain traction with this new technology. There are many side effects connected to the use of virtual reality, some are immediate, and a cause for more concern, and many effects are yet to be seen.

Editor’s Note: Read Our Article On How to Get Started With VR

Some effects not only affecting physical health but the psyche as well. There is still ongoing research on its effect on human development and maintenance or inhibition of sensory homeostasis. Most of the effects listed apply to immersive VR, although some
may apply to more “mild” forms of VR as well.

Side Effects of Virtual Reality

Your brain utilizes the vestibular system for spatial orientation. It achieves this from the inner ear to the cerebral cortex – helping you orient your head position, posture, and balance your sensory equilibrium according to the environment around you.

Virtual Reality seeks to mimic the environment through auditory, visual, and tactile replication of a real environment.

One of the first issues with spatial orientation come with accidents and falls that occur when a virtual reality user becomes immersed in the environment to the point the real environment outside of the headset becomes a hazard. People can trip over objects and even incur serious injuries if they use VR in anything other than a mostly empty room.

It is actually recommended not to use virtual reality unsupervised, as even if you were in an empty room – the immersion can cause you to think you are moving in a direction you aren’t – and cause a fall.

The orientation issues above also cause the feeling of motion sicknes/nausea for virtual reality users, now termed “cyber-sickness”. In severe cases the symptoms of dizziness can persist for more than one day if VR was used for longer than the recommended 30 minutes.

Sensory-spatial confusion merges into the next side effect:

The Illusion of Distance

Virtual Reality causes something called the vergence-accomodation conflict. Vergence movements are movements of the eye that are not at the same time, they are disconjugate. Vergence are accommodation eye movements when determining the distance of an object, however virtual reality is built on the illusion of distance alongside sensory immersion to make that distance seem real.

This causes a difficulty with determining true distance because you are still staring at a flat screen. What makes this a larger issue is the way this conflict affects the development of distance determination in children. For this reason, Virtual Reality is recommended for adults, but still not enough research has been done to determine whether vergence-accomodation conflict has long term effects on adults as well.

Conversely, for individuals already having balance issues, some rehabilitation centers are utilizing VR immersion for vestibular rehabilitation. In the same way that VR can be destabilizing, it is shown that if you already have an issue – it can aid in the re-acclimation of this balance technique.

Opthalmic issues extend into virtual reality as well. In 2016 the journal of Opthalmology published a study reporting that as much as 40% of the population has nearsightedness/myopia. It was also projected that by 2050 this would increase to 50% of the population. The journal said this was likely partially correlated to the increased use of screens.

Eye strain is an extended effect from the vergence-accomodation eye convergence issue. The brain is faced with realistic presentation through a flat surface – causing the eye to constantly re-focus and re-orient to adapt to the unnatural illusion.
For this reason, only sessions of half an hour are recommended when using VR.

Those who are already prone to seizures are strongly discouraged from using VR due to its ability to provoke epileptic episodes in those with predispositions. This is one of the less widespread effects of VR, but very serious.

So far we have covered mainly physical side effects of virtual reality technology. Although this sector of research is still growing, it is important to also note that VR tricks your brain into a dual reality scenario. This in mind, given the graphics are rendered to mimic reality well – your brain may also record some of the images as if they were real.

This is more of a personal responsibility factor, it is possible if an image is felt throughout the senses in a realistic way and causes a psychological disturbance, to develop Post Traumatic Stress Disorder Symptoms if the image was too violent.

The negative side of VR is apparent when it changes your real life emotional state and overall interactions with others in the real world. As with most entertainment, The key with using Virtual Reality is to use it responsibly as a mild escape, rehabilitation services, education, but not a true alternate reality replacing existing in a true environment.